The stained-glass art depends very much on architecture. It has bloomed as of the early stages of gothic architecture. There was no room for it anymore at the luxurious ornemental baroque or rococo times. The clear lines and the structural innovations of the 20th-century-architecture, based on steel, glass and concrete, offer again unique opportunities to stained glass. 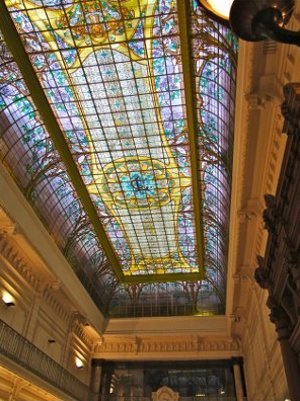 The Crédit Lyonnais' window is one of the very few examples of such a large window in Europe, that is conserved in its original site.

This window was created in 1901 by Jacques Gruber with the assistance of Charles Gauvillé, Malzéville's master glazier. Its size is impressive:  a 264 panel-ceiling of 250 m², which is about 23m length by 8m width.The window was restored by Jacques Gruber himself in 1920 and was saved from destruction thanks to the intervention of the Monuments Historiques department.

The window is bright with multiple colors. One can notice tones of velvet, turquoise and mauve. The decoration is based on geometric and vegetal patterns displaying flowers, which stem interlace around a framework. This suggests cradles. It  comes out as light and suggests a soothing "aquarium". This skylight features a prism offering a color fan including multiple tones. 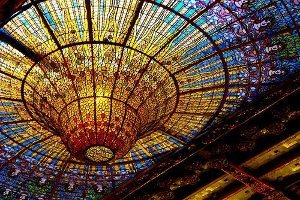 The Palau de la Música Catalana is an architectural jewel of Catalan Art Nouveau, the only concert venue in this style to be listed as a World Heritage Site by UNESCO, which today represents an essential landmark in the cultural and social life of Catalonia.

The building is designed around a central metal structure covered in glass, which exploits natural light to make the make Domènech i Montaner's masterpiece into  a magical music box which brings together all the decorative arts: sculpture, mosaic, stained glass and ironwork.

The design of the Palace is typical of Catalan modernism in that curves predominate over straight lines, dynamic shapes are preferred over static forms, and rich decoration that emphasizes floral and other organic motifs is used extensively. In contrast to many other buildings built in the modernisme style, however, it must also be said that the design of the Palau is eminently rational. It pays strict attention to function and makes full use of the most up-to-date materials and technologies available at the beginning of the 20th century (e.g., steel framing).

The rich decoration of the façade of the Palau, which incorporates elements from many sources, including traditional Spanish and Arabic architecture, is successfully married with the building's structure. The exposed red brick and iron, the mosaics, the stained glass, and the glazed tiles were chosen and situated to give a feeling of openness and transparency.

The concert hall of the Palau, which seats about 2,200 people, is the only auditorium in Europe that is illuminated during daylight hours entirely by natural light. The walls on two sides consist primarily of stained-glass panes set in magnificent arches, and overhead is an enormous skylight of stained glass designed by Antoni Rigalt whose centerpiece is an inverted dome in shades of gold surrounded by blue that suggests the sun and the sky. 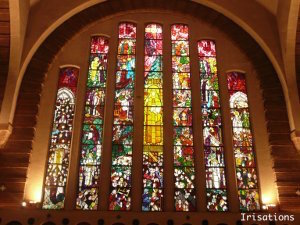 The church was built from 1935 to 1946 thanks to His Grace Eugène-Edmond Loutil to pay tribute to the Saint in his native Alsace. Jacques Barge, the architect, designed a church in a romanesque-byzantin style.

The church has three domes, which reminds of the Hagia Sophia basilica from Istanbul, Turkey. The octagonal tower is 72 meters high, the highest in Paris. It looks like a minaret. The building is made in reinforced concrete and covered by Saverne's sandstone and rose bricks.

On the left side of the nave, the three side chapels are enlightened by three huge windows made from 1935 and 1937 by François Décorchemont, a master glazier. The center window illustrates scenes from Saint-Odile's life. The two other windows, under the protection of Saint Raphaël and Saint Michel archangels, tell the story of evangelization of Gaul at the merovingian time. These stained-glass windows were taken off the frame and sheltered at the beginning of the second world war in 1939, hence they have been protected from damages or destruction.

The windows are wide and high, their total surface area is of 300 m2. Their function is to lighten the whole nave, that only has openings on the north side. Their brightness is based on the impressive "pâte de verre" (glass paste) technic that was developed by the artist himself.

Each window-pane has its own cast. The art of the technic relies on the mix between colored pastes to get the utmost decorative effets. Each pane is then a single artwork in itself. One could consider that the small black lines that suggest the details of the faces (eyes, nose, mooth ...) are made of grisaille painting. It is not the case however: the traits of the faces are suggested by a a groove inside the glas paste that is filled with cement! The inside relief glass surface shows refracts a much brighter light. The process of pâte de verre is long and complex, and therefore requires additional costs.

Saint-Odile's windows are the only artwork of François Décorchemont in Paris. They are considered as a masterpiece of glass arts in the 20th century. 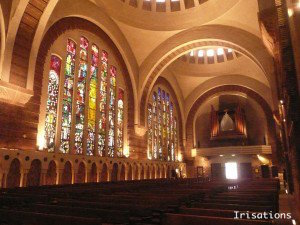 Churches have been build throughout centuries first in wood, then in stone. These materials have led to the construction of famous religious masterpieces.

Architects started to use new technologies in the second half of the 19th century, therefore to innovate. First, by building an iron framework covered by stones. The construction was then faster, robust and cheap. Saint-Eugène's  (Paris, 9th district) was the primary church built with such materials in Paris. Then the technology of reinforced cement initiated by Paul Cottencin has emerged and was used for flat surfaces, such as Saint-Jean-de-Montmartre' chruch (Paris, 18th district).

As of the beginning of the 20th century, new materials like reinforced concrete and new construction processes pave the way for innovative frameworks, for example the large arches without intermediary pillars to hold the structure in Sainte-Jeanne d'Arc's basilic (Paris, 18th district). The use of reinforced concrete is also showcased in Sainte-Dominique's church (Paris, 14th district).